Running strongly from the outset, the #88 Maranello Motorsport Ferrari 488 completed the journey by leading 136 of the 290 laps.

The race saw cruel blows dealt to a welter of leading contenders including the two Nissan Nismos, the three BMW M6 coupes, the factory Audis, the factory #911 Porsche and the #8 Bentley Team M-Sport Continental GT3.

But none were crueller than the late race crash for Shane van Gisbergen who seemingly had second wrapped up in the factory-backed Scott Taylor Motorsports Mercedes AMG GT.

Team-mate Maro Engel, sharing the AMG with the Kiwi along with Craig Baird, exploded after the incident.

“It is not motorsport in my book. I have to be careful what I say. All I have seen is a lot mistakes by Shane. It is a tough one,” Engel fumed.

Surviving a perilous event, Vilander, who started the race, put in a dazzling stint at three-quarter distance extending the Ferrari’s leading as he had done earlier in the race.

Matt Campbell produced a starring role all round in the Competition Motorsports Porsche to finish second ahead of the #17 Bentley driven by Steven Kane.

It supplied the #12 Porsche with the Class A Pro-Am victory.

The late drama for Van Gisbergen began when he made contact with the #51 Porsche of Andrew MacPherson exiting the Chase.

McPherson made heavy contact with the wall as the stricken machine brought out Safety Car #15, ending the longest green flag running of the race of more than 2.30 hours.

Stewards had no sooner issued Van Gisbergen with a penalty on the restart than he lost control exiting the Dipper, slewing into the concrete.

He attempted to crawl back to the pits before coming to a stop at the Chase which brought out the 16th caution period of the race with just over 15 minutes remaining.

The race came down to a final hour showdown between Supercars heavyweights Whincup and van Gisbergen.

Whincup came in for a final service for fuel and new Pirellis with around an hour to go, leaving van Gisbergen with a lead of 54.4s however the Kiwi needed to pit.

Van Gisbergen responded with 45 minutes remaining by pitting but elected against swapping the medium compound rubber for fresher boots, taking on fuel only.

The Kiwi emerged up Mountain straight with a 5s lead over Whincup’s Ferrari which had the benefit of fresher boots.

However Whincup reeled Van Gisbergen in within a couple of laps, spearing past the Mercedes going into the Chase with the pair engaged in an entertaining dice as Whincup put his right-hand wheels onto the dirt.

Campbell was unlucky not to be right in the mix for the win after an against-the-odds effort by his LA-based Competition Motorsports Porsche team of Marc Lieb, Patrick Long and David Calvert-Jones.

The 22-year ace was running strongly in third before he misjudged a move under brakes coming into Hell Corner, tagging the back of David Russell’s Lamborghini (three laps down) before spinning which cost him 40s.

Campbell was then issued with a drive-through penalty, the fourth such time officials issued the #12 Competition Motorsports Porsche with an infringement during the race.

The #1 Tekno McLaren had started the race from the pitlane with Come Ledogar managing to salvage a brilliant fifth in the 650S he shared with Alvaro Parente and Rob Bell.

The #21 Porsche of Dean Grant, Dylan O’Keeffe and Xavier West took out Class B.

The Invitational Class saw Keith Kassulke, Will Brown and Rod Salmon take the win in the MARC Cars Ford Focus. 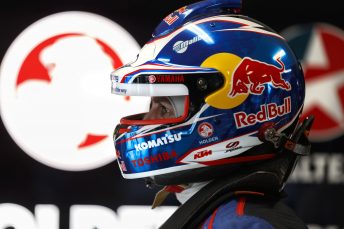