Maranello Motorsport plans to step up its Bathurst 12 Hour preparations by fielding its Ferrari 488 for Jamie Whincup and Craig Lowndes at Challenge Bathurst in November.

The move will see the team assisted by Supercars powerhouse Triple Eight at the February 3-5 endurance race.

Eager to maximise its Bathurst preparations, 2014 winners Maranello Motorsport will conduct a series of tests with the Triple Eight duo, including a valuable run at Mount Panorama from November 24-27.

The new Challenge Bathurst event will consist of two days of sprints, where a maximum of 120 cars, split into three groups, can take part in eight 20 minute timed track sessions.

Teams with new cars, such as Maranello and its Ferrari 488, will particularly benefit from the extra Bathurst running.

“We will do some real miles at places like Winton and Phillip Island, and then Challenge Bathurst where we will do a two-day test,” Maranello Motorsport team owner Mark Coffey told Speedcafe.com.

“We have got data comparing the Ferrari 488 and 458 at Phillip Island and Sydney Motorsport Park, but it is important to get some data for Bathurst to make sure we are maximising the assault.

“Pending on Roland Dane’s (Triple Eight boss) decision and Jamie and Craig’s availability, the plan at this stage is to have them there.

“Jamie is a professional and after a couple of laps he will be straight in the window.

“I think it’s not so much the car which will take a bit of time to get used to, but adapting to left-hand-drive.”

Maranello will receive significant support from Triple Eight after striking a technical arrangement with the outfit for next year’s race. T

Triple Eight boss Roland Dane says the Brisbane team has long been eyeing involvement in the Bathurst 12 Hour, labelling the current alliance as a perfect pathway into the event.

The team will provide an engineer and additional staff to the program, building on a relationship that has seen Jeromy Moore and Grant McPherson previously part of the team.

Dane says Triple Eight has no immediate plans to field an entry of its own in the race.

“We have been talking internally about the best way to be involved in the Bathurst 12 Hour,” Dane told Speedcafe.com.

“There is no real obvious GM product for us to go to at the moment so we thought Ferrari is the next best thing.

“It means we can build on those relationships with Ferrari and Maranello and be able to put something together.

“The idea of putting Craig and Jamie in a car together again at Bathurst, which obviously got banned after 2009 in Supercars, was appealing.

“I’m happy to just look at co-operating with someone on the day and see if we can bring something to the party.

“Maranello have a good history there having won the race before, and they have been around the traps in GTs for a long time. If we bring something to the effort then we will be very happy.”

“The only (GT) race that a team like us should get involved in is the Bathurst 12 Hour,” said Dane.

“The Australian GT series is a good category but it should be run by smaller teams otherwise you get big teams with big budgets come in and rip the guts out of the championship. 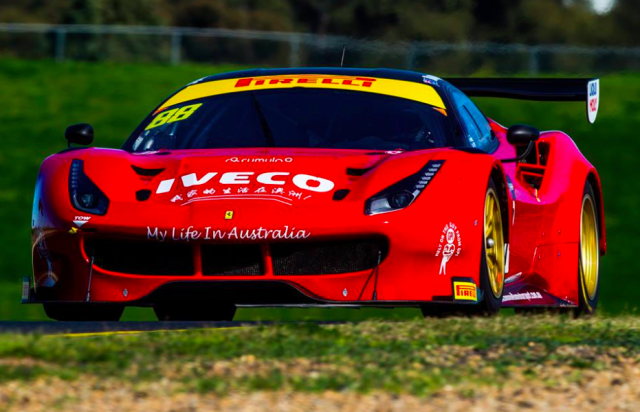